Going to Mt. Pulag, the highest mountain in Luzon and the third highest in the Philippines, often requires travelers to take what has become known to mountaineers as the “monster jeepney.” These monsters of a vehicle go around the Cordillera region and are aptly named for their engines and tires that can withstand long hours of rough and mostly uphill roads.

Having climbed several mountains in the Cordillera, including the aforementioned Mt. Pulag, I have had several experiences riding  a monster jeep. Being inside one, while the vehicle is being maneuvered through the roughest of cliffside roads, is exhilarating but also very difficult. One would have to endure the non-comfort of bumpy roads, sharp curves, and steep ascents and descents. Fortunately, there is a way around that – one that is even more fun and thrilling: toploading!

Being on top of a monster jeep while it is making its way through the mountainous region might sound more difficult than being inside one. Trust me, it is not only more adventurous, it is also easier. When you are inside the vehicle, you tend to get tossed around and might even bump your head a couple of times because the roads are really rough; when you are on top of it, there is less getting tossed around and definitely no bumping your head. You do have to hold on for dear life, though. 😉

Here are some pictures taken en route to Mt. Pulag when I first climbed it in November last year:

hikers on top of a monster jeepney 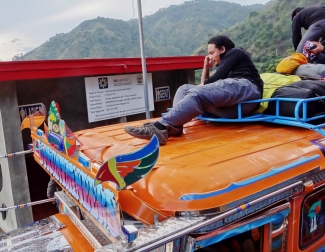 a hiker looking all comfy on top of a monster jeep

And these were taken when we were on our way home:

Going back to Baguio (where toploading is prohibited)

Two thumbs up! (but there’s only one in here since my other hand was holding the camera)

4 thoughts on “Taking the Monster Jeep to Mt. Pulag”

An avid life lover. View all posts by angelocrux

Mothering in the New Era

Musings about my Motherhood, Mexico, and the Magic of Life in general

As Far As We Can Get

IF I CAN'T BE A DRAGON-WHISPERER, CAN I AT LEAST HAVE A TALKING DOG?

The world through Brahmin eyes...

SubSelfie.com is an independent online magazine for the young generation of Filipinos.

"The world is too big," she said, "but that doesn't mean we stop searching."

Life is meant to be lived, so live boldly.

A compilation of chaotic thoughts desiring to be freed from your not so extraordinary storyteller.

Repository of all random things.

The Art and Craft of Blogging

Of Mountains, Men, and their Maker: Going Higher with God - A Guy's Guide to Spiritual Growth

The abundant life is the abandoned life.

I don't know where I am going, but pretty sure I'll know when I get there

Life undimmed through mountains and books

MIKE OFF THE MAP

steady life on the go

blog-evers on my journey and my faith

A book publishing and design studio.

Tripping Over Cancer
cats on the moon

A cat can look at a king's eye

The Philippines: A Paradise Overland and Undersea

The latest news on WordPress.com and the WordPress community.

Romancing the planet; a love affair with travel.

THE PROFESSIONAL HECKLER
What The F!

Musings of a Hebrew Princess

Howdy! We're the largest independent bookstore in Texas. This is our blog.

The Book Wars
The Domestic Man